You shouldn’t be going to the funeral for your best friend’s husband at the age of 27. You want to think it won’t happen. But the message comes. You reread it over and over thinking this can’t be true.

The days and weeks following Bret’s grain bin accident still didn’t make it seem real. But it happened. Investigations happened. The funeral and visitation happened. He was the second Iowan to die in a grain bin accident in 2015. You think it won’t happen to you until you’re sitting in a lawyer’s office as your best friend relives the day and explains how her husband became trapped under bushels of soybeans.

Grain-related entrapments accounted for 56.7% of agricultural confined spaces documented cases in 2019. The same 2019 Purdue University study reported 58.2% of them were fatal. Special equipment and training are required for a successful rescue like the call that the Hills Fire Department assisted on in January 2021. As we find ourselves in the middle of Grain Bin Safety Week, an advocacy campaign started by Nationwide in 2014, we’re proud to support the Hills Fire Fighters Association with a $500 donation for additional grain bin rescue equipment. 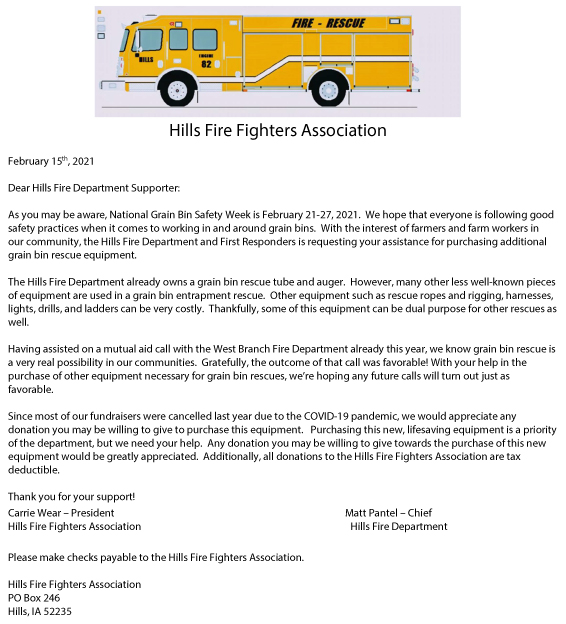 Summer is always a busy time between vacations and county fairs. July was just that with the feed department. With many team members out, our July STRIVEr set the bar higher by learning a new position. Read more on how Shauna Gerlieb, feed ingredients customer service representative, took home the July honors.

While we recognize a new STRIVEr each month, this month’s hits just a little different. Our June STRIVEr is more than deserving of the honor not just for her efforts in her last month at Stutsman’s but for continuing to make a difference throughout her 52-year career here. Congratulations to Mary Escher, AR/AP manager for […]

Building a legacy takes time and leaving one is something to be recognized. For Mary Escher, building her legacy with Stutsman’s started in June 1970. Very few people can say their career exceeds half a century and even fewer can say they have spent their 52-year tenure at one company.