From the Desk of Mark Stutsman: Crop Protection Prices

As a follow-up to “Market Sharks”, an article that was all about the fertilizer world markets, I thought you might be interested in my take on what has driven up costs of crop protection products for the summer 2022 application season.

Let’s first visit the supply side of the equation.

So, when can we expect supply to catch up with demand?

Where does all of this leave us? 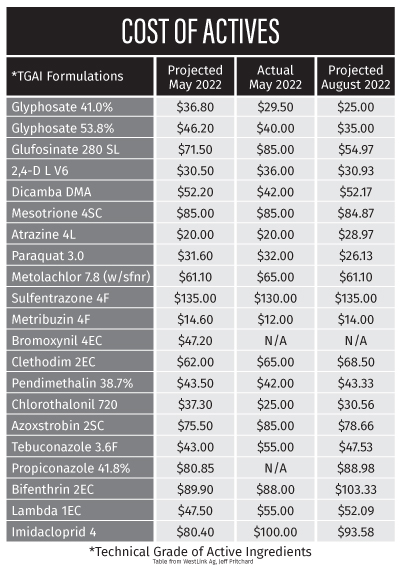 The chart to the right outlines some of the most used active ingredients in the Midwest. It illustrates what we think the formulators were paying for actives in May as well as what we think they will be paying this fall. There is no doubt that product inventories are tight today, maybe as tight as I have ever seen them.

As the Russian invasion of Ukraine demonstrated in the fertilizer markets, any unforeseen event can have dramatic and long-lasting effects. In these trying times, early and constant communication with your suppliers is key.

As always, I look forward to hearing your thoughts on this. Stay safe!
Mark Stutsman

Meet Our 2022 Interns June is National Dairy Month: It all started in the dairy industry…

Hailing from West Liberty, our newest developmental sales agronomist, Evan Dalton hit the ground running and has been busy learning all the facets of our agronomy department since October 2022.

For those of you that have been to our Hills facility this summer, you have probably noticed that we have had some construction congestion and noise going on. We made the decision during the fall of 2021 that we needed to update our dry fertilizer facility. While it was not an easy decision to tear […]

As the ProVantage advisor, Tyson Miller is responsible for all aspects of our ProVantage program as well as working directly with growers and the agronomy sales team to bring valuable insight from growers’ data.