Side of Manure Please

Sidedressing has proven to be a valuable way to deliver nitrogen when it’s needed most, but have you thought about sidedressing with manure?
From the research previously conducted using tank applications, OSU realized the opportunity dragline application held. A glaring concern with sidedressing using a dragline system was the effect the weight of the hose would have on the emerging corn plants and the yield they would produce. The team at OSU began their testing on plots with corn between stages V1-V5, challenging their immediate concerns.
To coincide with studying the effects of drag hose on plant stand/yield, a field study was conducted with liquid swine manure. The dragline study was carried out in Darke County Ohio on corn post-emergent before V4.

Three years of data revealed no significant damage to corn stands until the V4 to V5 growth stage. The V4 stands were identical in 2014 and 2016, but due to a wet spring in 2015, the V4 stand was poor, which tremendously lowered the average. 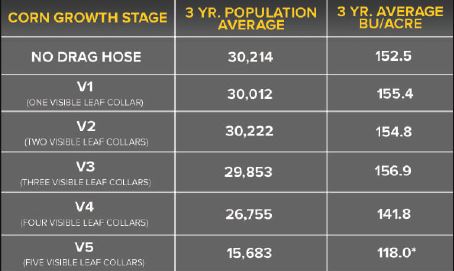 *Indicates only 2 years of data

To establish a more effective window for manure application, provide crops with proper nutrients at an essential time, and reduce purchased fertilizer costs.

OSU conducted small-plot research from 2012 to 2016 with liquid swine and dairy manure. More than 45 smaller, on-farm plots were used throughout this period, along with larger, field size plots. Manure was applied with a tank when the corn reached the V2-V3 growth stages. Pre-emergent and post-emergent comparisons were conducted for manure placed head to head with 28% Urea Ammonium Nitrate (UAN) as well. All comparisons were applied at an equal rate of 200 pounds of available nitrogen.

Replacing 28% UAN (Urea Ammonium Nitrate) with liquid livestock manure resulted in a 10 to 12 percent increase in bushels per acre, over a 5 year period. Note that the incorporated manure outperformed the surface-applied manure. 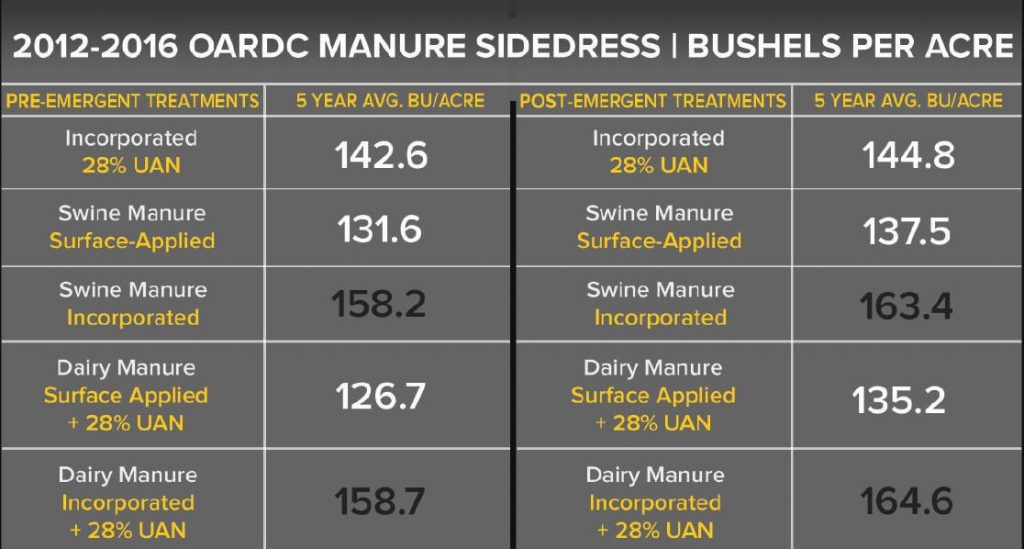 Over the years, the agriculture industry and our society as a whole has progressed leaps and bounds in reducing environmental impact, and the latest transition for Bazooka Farmstar is no different. To stay current with industry-wide EPA regulations, tier 4 engines will be standard moving forward.

Meet Parker Werling and Zachary Badtram, our 2020 interns! While they benefit from the professional development our program provides, we are just as excited about the ideas, perspective, and passion they bring to the table. This summer, Parker and Zach can be found serving our agronomy customers through crop scouting services. If you catch them […]

It’s pretty obvious farming is a profession that’s not for the faint of heart. Chasing the ever-moving target of healthy crops and high yields is a never-ending battle, especially when dealing with so many unpredictabilities. Even with what you can control, (aka a fertilizer plan that seems rock solid) striping and light green coloration can […]